Bhutan: Weaving Rainbows in the Himalayas

It is amazing how the Universe delivers you messages once you decide to open yourself up to new experiences.

Two months ago, I went to Hong Kong. A girlfriend of mine accompanied me for the first few days of the trip. We have a shared interest in social entrepreneurship, travel and eating good food.  On my friend’s last night in Hong Kong, we went out for dinner and got chatting about all the exotic places in Asia that we would love to visit. Our minds started to wonder. Would it be Laos, Cambodia, Myanmar, Bhutan? We chatted about the third world and the developing world, and the vital role that entrepreneurship plays in empowering people to be financially independent. The food, wine and conversation that night was excellent.

The next day I was on my own. I wandered into an old, converted government building filled with dozens of cool pop up shops by Hong Kong designers. My eye caught sight of a banner advertising an exhibition featuring Bhutanese Women Weavers. Fancy that, I thought. Bhutan mentioned twice within a space of 24 hours. The Universe had sent me a message.

When I walked into the exhibition, I was greeted with a visual treat. Walls lined with colourful textiles and large scenic photographs showing the Bhutanese landscape and its people. Large wicker baskets sat on the floor exploding with colourful scarves. In the middle of the room was a centre table with a large loom resting on it. Sitting at the table being interviewed by two journalists was Quin Sq, a Hong Kong based CFO who had founded a social enterprise, Ana by Karma, in June last year (2014). This was the first time she was exhibiting handmade scarves woven by illiterate Bhutanese women. While I listened to her remarkable story, many people strolled inside, lured by the rainbow of colours they could see through the store window.

Quin first travelled to Bhutan in 2003 as a tourist and last year returned in a professional capacity to train management teams in business strategy. She has fallen in love with this peaceful, unspoilt kingdom, that is the only country on earth to measure its success based on the happiness of its population.  On her first trip to Bhutan in 2003, Quin met Dorji and his wife, Karma. Unlike her husband, Karma does not speak English and is illiterate. Over the years, Quin had kept up her correspondence and had formed a close friendship with Dorji. Last year when visiting him, Dorji mentioned to Quin that his existence was “Hand to Chin”. This meant the food wasn’t even reaching his mouth. Distressed to hear this from her good friend, Quin set up a time to meet Dorji and Karma to brainstorm way to help them earn some extra income to supplement Dorji’s wage. 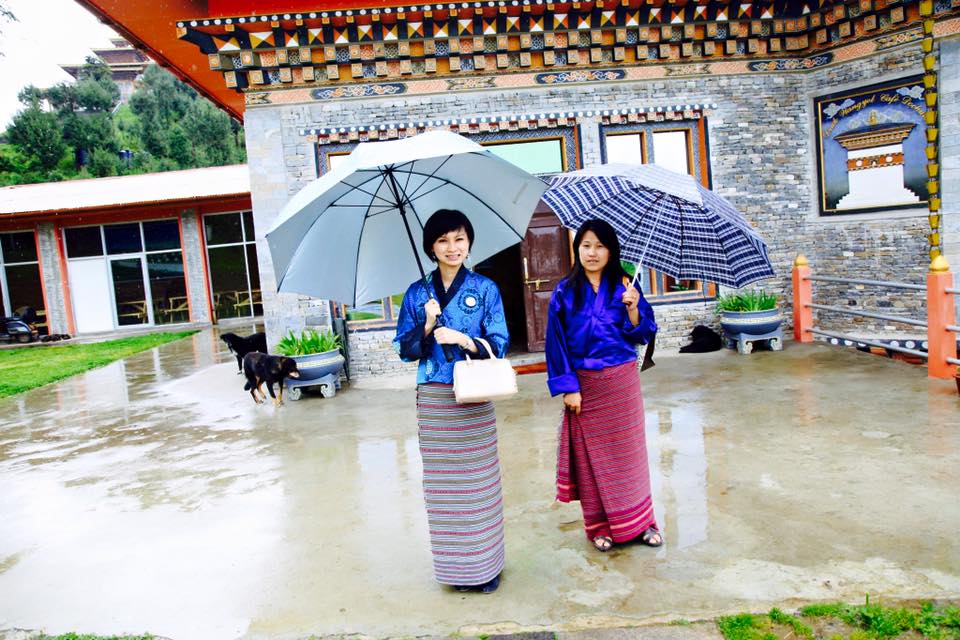 “On my first trip to Bhutan in 2003, Karma had given me a lovely kira, a big piece of material that’s wrapped around the torso. Woven in vibrant hues of blue and dotted with yellow stars, it could have easily sold for US$200 or more. Now, 11 years later, I realised they must have given me the most expensive thing in their home. Finally, we hit upon the idea of sewing the beautiful material that Karma weaved into bags, pouches and pencil boxes for sale to shops.”

To enable Karma to sew the material into bags, Quin reached into her purse and pulled out the US$200 needed to purchase the sewing machine in Bhutan. Karma outright refused to accept the money. She wanted Quin to teach her how to make her own money, so she could afford to buy her own sewing machine. Thinking on her feet, now that this gesture had backfired, Quin took off the scarf she was wearing and handed to Karma asking if she could make a scarf. After many minutes scrutinising the cloth and looking at it from every angle, Karma said she could do it.

When Karma turned up some days later with an armful of beautiful scarves in vibrant colours, not seen in the usually subdued textiles in Bhutan, an astounded Quin photographed them and got them out to her friends on social media. What happened over the next few hours was stunning. The original 10 scarves went in a flash, but friends started requesting multiple orders. Over 40 pieces were sold, amounting to many multiples of US$200.

“Karma burst into tears when I put the greenbacks in her hands; it was only later that I realised she had never seen so much money before. Money she earned with her own hands.”

The orders did not stop. Before Quin had much time to process it, the whirl of interest gave birth to a new social enterprise, Ana by Karma. Ana in Bhutanese means “Sister.”

Message sent to Quin from Karma in the weeks after AnaByKarma was formed. Her husband Dorji sent it on her behalf.

In only 14 months, this social enterprise, that started with Karma weaving an armful of scarves, has grown into a cooperative of 70 illiterate Bhutanese female weavers. Karma has emerged as a competent trainer of her fellow weavers. With quality control, standardized patterns & colours as well as logistics in place, Ana by Karma is a growing enterprise. Profits raised from the sale of the scarves are being directed to the weavers, who for the first time are earning an income, and have hope for their children’s education and their futures. Karma hopes her son can become a doctor.

In January 2015, seven months into the enterprise, Ana by Karma fully sponsored 60 weavers on a training workshop names WOW (Women Over-achievers Weaving Training Programme). The Institute of Management Studies of Bhutan was commissioned to teach them advanced weaving skills, standard operating procedures, team work and problem solving. Some weavers travelled six days to/from their villages to attend the workshop in the capital, Thimphu. For most of them, this was the first time they had learned in a classroom setting. Truly a WOW experience for them.

“Our mission is to empower illiterate under-privileged Bhutanese women weavers through the production and marketing of home made, hand made scarves to generate income; and create educational opportunities that would otherwise not exist for them and their families.”

Little did I know when I stepped into that exhibition that Karma’s story would touch me so much, and that I would choose Ana by Karma as the social enterprise that 40 To The Max would support.

So today, I am delighted to announce that 40 To The Max will be the official seller of Ana by Karma scarves in Singapore. They can be purchased online in our new store and will be delivered to your home. The scarves are for both women and men and make a fantastic gift.

Ana by Karma scarves are Happy Scarves from the happiest place on earth . All the scarves are handmade by women in Bhutan using Indian cotton yarn. They are individually woven on traditional wooden hand looms in the rural mountain villages of Bhutan. Every scarf is 170cm X 30cm. Handwash in warm water. Colours will not run.

By buying a Happy Scarf you are helping illiterate women in Bhutan become financially independent for the first time.

A portion of your purchase is channelled to fund ongoing programs that develop the weavers’ artistic and business skills, as well as their literacy, delivered by the Institute for Management Studies Bhutan. 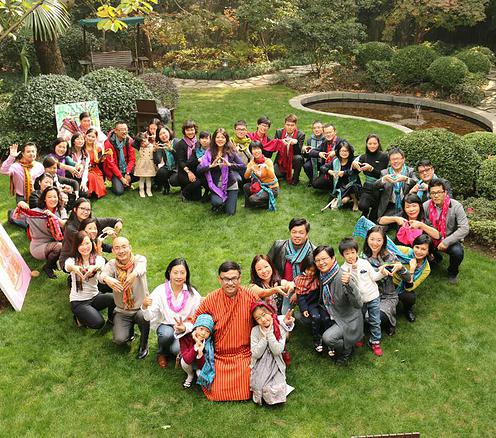